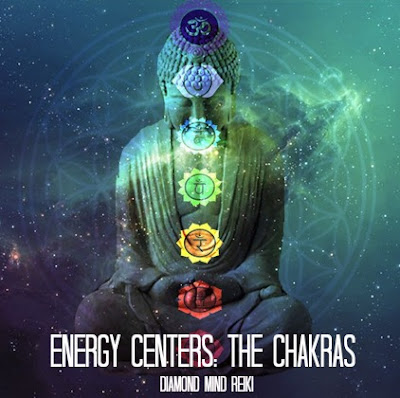 To understand yourself and energy, the chakras will be of central importance. There are seven major chakras associated with the human body, each one having a direct relationship to the part of the physical body it governs. The corresponding system on the physical body is called the endocrine system. Most people are concerned with the seven major chakras primarily, but we do have many more that lay within and outside our physical body. Each chakra is shaped like a funnel or whirlpool of energy. The seven main chakra vortices lie inside the body, along the spinal cord (which corresponds to a central energy channel) and up into the head.  Each of these seven major chakras, or primary energy centers, has its own character and corresponds to a unique aspect of our being- from the 1st chakra (physical vitality, or survival) to the 7th chakra (totality of beings, or spiritual perfection).

The chakras are energy processing centers, points of energy flow, and act as the major energy junctions in the energy field. The energetic operations within them are what make every aspect of our bodily, emotional, mental and spiritual life possible.  Every chakra is always receiving energy into itself, from all around, and it is this energy that supports the energy field and the entire life process of each individual. Aside from this entry of energy into the energy field through each of the seven major chakras, there is also an upward flow of energy in the central energy channel from the lower to higher chakras.  This upward flow of energy originates mostly from the earth and then moves through the 1st chakra, 2nd chakra, etc. as it ascends finally to the 7th (crown) chakra.  This energy is processed at each chakra, on its way up, in accordance with the unique nature of that chakra.  The lower chakras are simpler functioning, but as the energy ascends upwards there is a greater degree of sophisticated and more spiritual functioning.

We develop each chakra for a period of seven years, before moving onto the next one. This begins at birth, as we emerge from the protection of our mother's womb and start to develop our relationship with the outside world. The chakras represent a journey, beginning at the base and moving up. The chakras can be seen as a logical progression through life as we learn to deal with the outside world and its relationship with our inner world. The soul incarnates in the physical world, which is represented by the vertical line from spirit to earth. Then the soul goes through five levels of interaction with the world as it develops its physical, emotional, psychological and spiritual self. 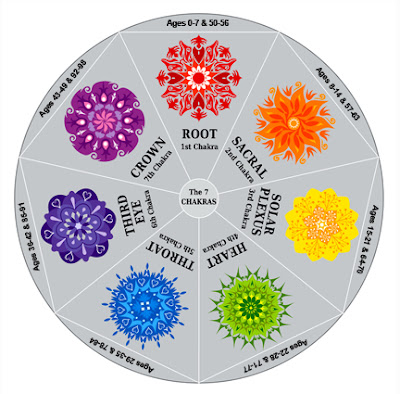 Each week coming up, I will spotlight one charka. What is represents on a mental, emotional and spiritual level. What physical aspects of the body it rules, as well as what imbalances will look like in all forms. Included will be ways to balance each center with different tools. 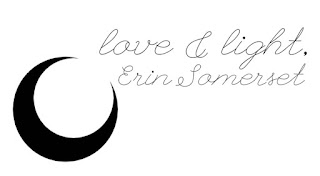